It’s due for release in the third quarter of 2022.

In the meantime, here are the main details of the game, which was first given its first public preview at the London International Casino Exhibition in February 2022.

Unlike other entertainment game shows, which use big wheels, Boom City uses two physical dice to drive the outcome of the game rounds.

How To Play Boom City

The game is split into two distinct phases.

Phase 1 is the main game round, which consists of a grid of six squares by six squares.

Each square contains either a number, One, Two or Five, or one of five Symbols, three of which give access to one of three Bonus Rounds

The game’s objective is to bet on numbers or the bonus squares you think will be chosen from the resulting roll of the two dice.

The result of the Gold Dice is used to pick the vertical row on the grid. The Blue dice result is used to select the horizontal column.

The square where the two intersect is the winning square for that game round.

If you correctly predict a number, you will receive a payout on your bet multiplied by the number. e.g., 1x, 2x or 5x. 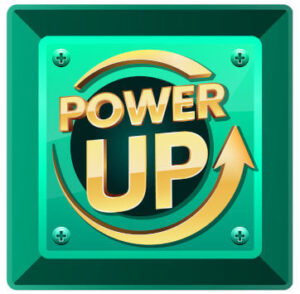 There are always four Power Up squares on the grid.

If the field is landed on, all Bust Fields are replaced with a 1x multiplier, while other squares get random multipliers. An extra dice roll is added.

The Power Up can improve all bonus rounds, while 5 Power ups in a Row will increase the final multiplier.

Boom or Bust Bonus Round

The Boom or Bust Bonus board is another 6×6 grid, covered with Multipliers, Safe Values and a Hyper Jump.

The objective of this round is to advance through the levels, deciding as you progress whether to Cash Out or Keep Rolling.

A “Safe Value” protects winnings from being lost if the player Busts out.

Landing on the Hyper Jump instantly moves the player up to Level 6 and lands on a multiplier.

Landing on a Level Up field moves the player up three levels with the chance of landing on a Safe Value or Multiplier.

Boom or Bust Board

In The Dice Battle players have to choose to play either the Gold or Blue Dice.

Both dice are rolled three times, with each result adding to the total of the last roll.

The side with the higher total wins will receive the total as a multiplier of their original bet plus the sum of the defeated side.

If one side rolls a tripple six a special award of 500x is paid on the initial bet.

The Lucky Drop involves a grid of 6 columns, of which the player has to pick one, while a maximum of six dice rolls are performed.

After each roll, the columns are populated with the dice roll outcome. If the results do not match the chosen column number, the players continue playing until it does.

The multipliers in a column increase each time the dice roll matches a column.

If five rolls in a row match with a column, the player will receive a multiplier between 250x – 500x on their initial bet.

The maximum payout for the game is 20,000x, but this needs a few to happen before that is reached. The likelihood is slim, but anything is possible.

The more normal range for the payouts will be between 1x and 250x, with more frequent payouts in the 10x – 20x range.

It’s a bit early to discuss specific strategies for playing or betting on Boom City.

What is immediately apparent is it will attract both small and large bets.

Strategies will include covering all betting options hoping that you’ll hit a bonus round and get a decent multiplier payout.

There is some decision making required in the Lucky Drop Bonus round. Picking the wrong column will see a small payout, while lucky players picking the right one will get a nice reward.

I’m looking forward to playing Boom City. There are elements of this game that have been taken from others. The Boom or Bust bonus round nods its head to the crash games that have become popular recently.

The dice mechanic is clever; it’s nice to move away from the big wheels – and it’s a lot cheaper to maintain.

Of course, you’ll get a minority of players screaming the dice are loaded, but these tend to be the ones betting big and losing – not understanding its gambling!

I think Boom City will be an immediate hit and an excellent bedfellow to Sweet Bonanza Candyland, one of my favourite games.