Join me as I run through the 2018 Live Casino Review. A lot has happened in the world of Live Dealers, it’s easy to forget the advances made during the year in this exciting niche of online gaming.

We’ve seen new games arrive and an explosion of land based casinos wanting to promote their brands through live streamed tables.

New Studios have been opened to meet increased demand and provide access to new markets.

The United States of America has come online in more ways than one. Live tables are now being streamed to players around the world from US land based casinos.

Evolution & Ezugi both opened studios in New Jersey specifically for the US market.

Mergers and acquisitions have continued. Pragmatic Play purchased Extreme Live Gaming and out of the blue just before Christmas, Evolution Gaming bought Ezugi.

As we head into 2019 the Best Live Dealer Casinos will be the ones that have adapted to the changes during the year.

Evolution Gaming has been the most prolific developer.

Ezugi launched Unlimited Blackjack with Auto Splits. This provides a solution for players wanting to split pairs during an unlimited blackjack hand.

Playtech re-launched Spin a Win following feedback that the initial RNG version wasn’t up to it. The new version is an entirely live wheel. It comes with a range of betting options not available on the similar Evolution Dream Catcher wheel.

Something called Trivia Show made a brief appearance during the Football World Cup. If you could answer 10 multiple choice questions correctly in a row you’d win a share of a cash prize pool.

A handful of New Studios were opened by a number of the providers. These were mainly for expansion purposes but also allowed access to new licensed markets.

Evolution was again the most prolific, opening studios in Canada, New Jersey USA and Tbilisi Georgia. 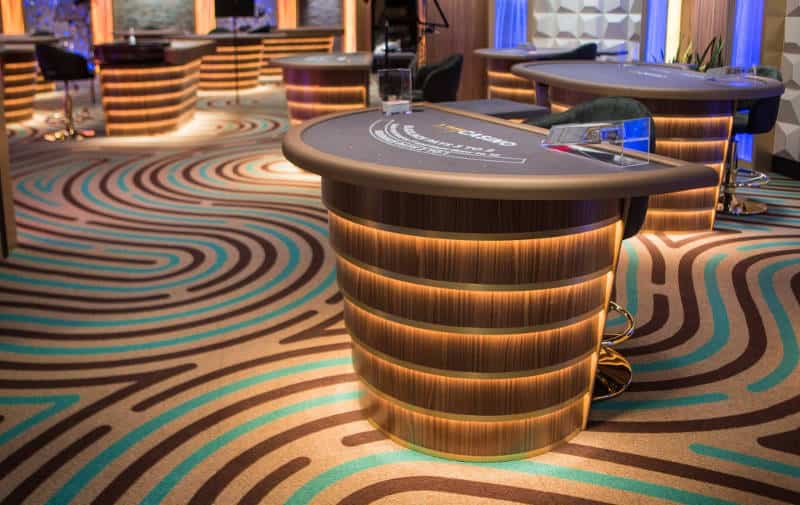 Authentic Gaming opened a studio in Malta, to house its Auto Roulette Wheels and the presenter led Blaze Roulette.

I was lucky enough to get a look inside the studio in November. 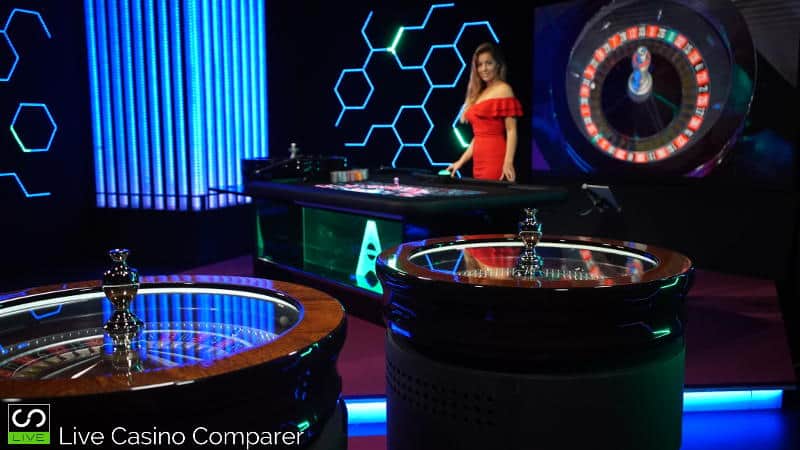 Asian operator Entertasia opened a studio in Latvia, while Asia Gaming under the brand of Amazing Gaming built a new studio within the Portomaso Casino.

Both are streaming games to a European audience.

VIP & High Rolling Players have come in for some special treatment this year.

Both Evolution and Playtech created specific solutions designed to give players a personal experience while playing at the tables. 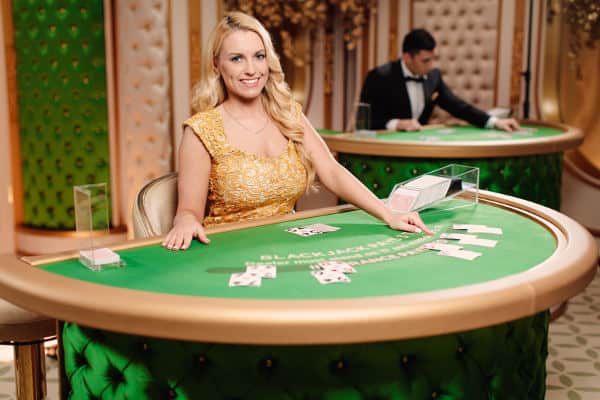 Evolution launched a range of Salon Prive Tables for Blackjack, Roulette and Baccarat. While Playtech launched its own set of Blackjack Soiree tables. 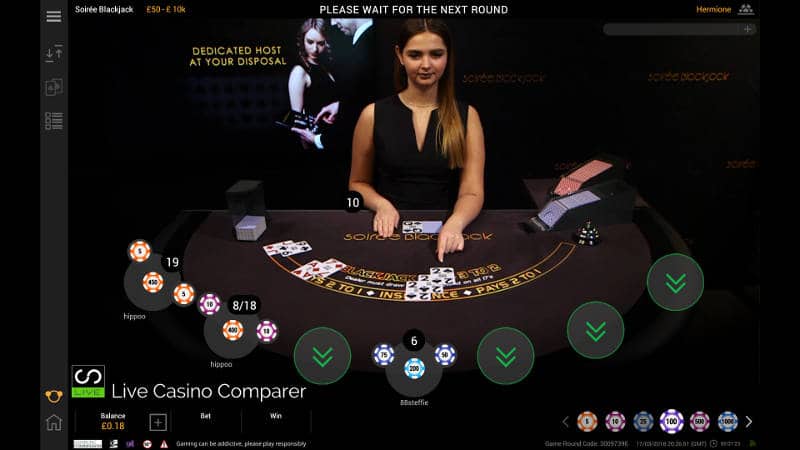 The Evolution solution provides access on a one player per table basis. They have a choice of dealer and can make decisions on when to change the dealing shoe or the speed of the game.

The Playtech version is easier to enter and allows multi players per table.

Both solutions provide a dedicated VIP Host to deal with requests and any issues that might occur.

Land Based streamed tables has seen the highest rate of growth this year. Evolution and Authentic lead the way here.

Authentic stole a march on everyone, by being the first to provide live streamed roulette from the US based Foxwoods casino. 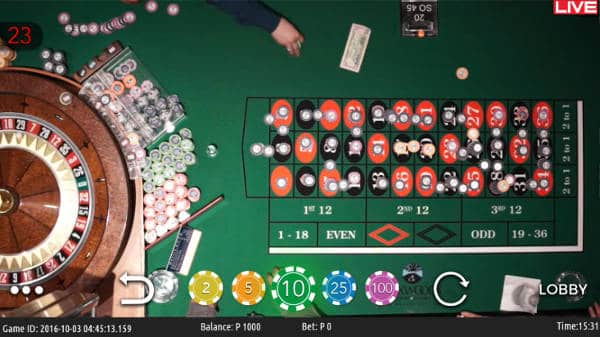 Not to be outdone by this Evolution signed a deal with Oceans Resorts in Atlantic City, while Ezugi are streaming a roulette table from The Golden Nugget casino in New Jersey.

Other tables added during the year include:

If you fancy playing at any of these Leo Vegas and Mr Green has got a good selection.

Innovations within Live Casino has been less than I would have expected.

The year got off to a good start with NetEnt releasing a new virtual lobby in association with Mr Green Live Casino. 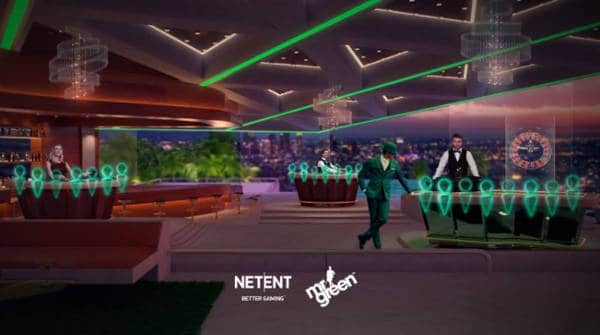 Live Beyond Live brings together improvements with the playing interface and a new way of presenting the tables in a virtual lobby.  The Mr Green implementation has some unique elements not seen in subsequent roll outs.

The virtual lobby provides NetEnt with a foundation to present its games without the need for building an expensive physical infrastructure.

Latterly, Unibet has upgraded to the Virtual NetEnt Lobby and now provides a mix of both new and old playing interfaces.

Codeta introduced us to Skill Score, a way for players to track their effectiveness while at the tables. In truth it’s just glorified marketing hype. It doesn’t help players improve their play. A shame really, the idea was very good, the application not so. It could have been one hell of a USP if deployed differently!

Casumo were the first operator to create their own dedicated Dream Catcher Wheel which they’ve called Top Wheel Treasures. Its fully branded by Casumo for their players only. 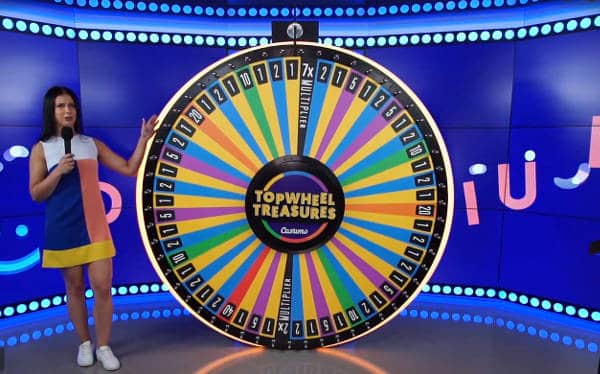 It’s been built to appeal to the more serious player. However there is no restriction on who can use the tables. They are not the busiest of tables, so head there if you’re struggling to find a seat elsewhere.

William Hill has gone through a complete refresh of their live casino tables. They’ve been brought up to date, with new tables and uniforms provided as part of the make over. 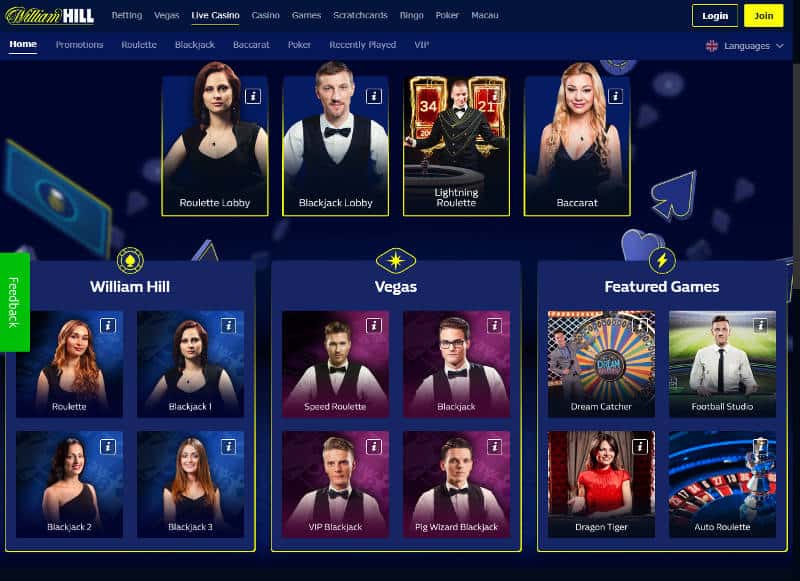 As ever the William Hill Live Casino is still one of the leading Live Casinos to play at.

Lastly Netent finally added Side Bets to it’s Blackjack Tables. This may seem like a small thing, but this is probably responsible for keeping players away from NetEnt Blackjack. I’d expect to see more innovation at NetEnt during 2019.

We’ve not seen VR technologies take off as some predicted. I’ve tested them and can understand why.

The technology is great, but surely the whole point of Live Casino is to bring the land based experience online, in a way that is social and immersive.

Sitting in your front room wearing a headset is hardly that!

I’m not disappointed though, as this technology will continue to challenge us in how we consume games online.

Two of Evolution Gaming’s Progressive Jackpots have been hit during the year.

The Casino Hold’em Jackpot of over £2m is still to be won!

The US Live Dealer market is starting to pickup. While the only licensed territory is currently New Jersey, operators are racing to get a presence.

888 entered earlier in the year, and Unibet announced its intention to provide Live Casino games to New Jersey residents in December.

Both are using the new Evolution Live Casino studio at the Hard Rock Café Casino.

I’m always surprised to hear of mergers and sales. Two major ones occurred during the year.

Extreme Live Gaming was sold to Pragmatic Play. They plan to run down the brand and create a new Live Casino solution to rival Evolution Gaming during 2019. Good luck with that!.

Probably the most surprising was the announcement that Evolution Gaming would be buying Ezugi.

To me Ezugi were the only real independent competitor to Evolution. They have been growing fast over the last 3 years and have a very good live casino solution.

The purchase is a good move by Evolution, it’s takes out a competitor and also gives them access to new markets. I should buy some shares now!

While not being new to live casino, Amazing Gaming is the launch of a European brand of Asia Gaming.

I mentioned a few years ago Asian operators were looking to get a foot in the door of the European market. That reality is now with us.

I’ve been disappointed that apart from a select few online casinos, the majority of online casino operators still don’t appear to understand how to engage, reward and retain live casino players.

We’ve seen no major shift in this area, so I’m still restricted to playing at just a few casinos who seem to know what they are doing.

As a player, I am looking for a great experience and that starts from the moment I join the casino.

NoBonus Casino has bucked the trend and has a USP of providing cashback on losses. You should take a look if you want an alternative place to play Evolution games.

Live Casino and Live Dealer games has never been as buoyant as it is now.

All of the operators are sitting on announcements for the New Year. Expect to see and hear about them in February, when the next big trade show, ICE, is held in London.

Until then, enjoy your gaming!